Rekindle the flame of your vocation, and endure for the Gospel

Paul, an apostle of Christ Jesus by the will of God, for the sake of the promise of life that is in Christ Jesus, To Timothy, my beloved child: Grace, mercy, and peace from God the Father and Christ Jesus our Lord. I am grateful to God Ö whom I worship with a clear conscience, as my ancestors did Ö when I remember you constantly in my prayers night and day.

I remind you to rekindle the gift of God that is within you through the laying on of my hands; for God did not give us a spirit of cowardice, but rather a spirit of power and of love and of self-discipline. Do not be ashamed, then, of the testimony about our Lord or of me his prisoner, but join with me in suffering for the gospel, relying on the power of God, who saved us and called us with a holy calling, not according to our works but according to his own purpose and grace. This grace was given to us in Christ Jesus before the ages began, but it has now been revealed through the appearing of our Saviour Christ Jesus, who abolished death and brought life and immortality to light through the gospel. For this gospel I was appointed a herald and an apostle and a teacher, and for this reason I suffer as I do. But I am not ashamed, for I know the one in whom I have put my trust, and I am sure that he is able to guard until that day what I have entrusted to him.

To you I lift up my eyes
who are enthroned in heaven.
Behold, as the eyes of servants
are on the hands of their masters. (R./)

As the eyes of a maidservant
are on the hands of her mistress,
So are our eyes on the Lord, our God,
till he have pity on us. (R./)

In the resurrection, they will neither marry nor be given in marriage

Some Sadducees, who say there is no resurrection, came to him and asked him a question, saying, “Teacher, Moses wrote for us that ‘if a man’s brother dies, leaving a wife but no child, the man shall marry the widow and raise up children for his brother.’ There were seven brothers; the first married and, when he died, left no children; and the second married her and died, leaving no children; and the third likewise; none of the seven left children. Last of all the woman herself died. In the resurrection whose wife will she be? For the seven had married her.”

Jesus said to them, “Is not this the reason you are wrong, that you know neither the scriptures nor the power of God? For when they rise from the dead, they neither marry nor are given in marriage, but are like angels in heaven. And as for the dead being raised, have you not read in the book of Moses, in the story about the bush, how God said to him, ‘I am the God of Abraham, the God of Isaac, and the God of Jacob’? He is God not of the dead, but of the living; you are quite wrong.”

Beloved, what sort of persons should you be, waiting for and earnestly desiring the coming of the day of God, because of which the heavens will be set ablaze and dissolved, and the elements will melt with fire? But, in accordance with his promise, we wait for new heavens and a new earth, where righteousness is at home.
Therefore, beloved, while you are waiting for these things, strive to be found by him at peace, without spot or blemish; and regard the patience of our Lord as salvation.
You therefore, beloved, since you are forewarned, beware that you are not carried away with the error of the lawless and lose your own stability. But grow in the grace and knowledge of our Lord and Saviour Jesus Christ. To him be the glory both now and to the day of eternity. Amen.

In every age, O Lord, you have been our refuge.

Lord, you have been our dwelling place in all generations. Before the mountains were brought forth, or ever you had formed the earth and the world, from everlasting to everlasting you are God. R.
You turn us back to dust, and say, “Turn back, you mortals.” For a thousand years in your sight are like yesterday when it is past, or like a watch in the night. R.
The days of our life are seventy years, or perhaps eighty, if we are strong; even then their span is only toil and trouble; they are soon gone, and we fly away. R.
Satisfy us in the morning with your steadfast love, so that we may rejoice and be glad all our days. Let your work be manifest to your servants, and your glorious power to their children. R.

Some Pharisees and some Herodians were sent to Jesus to trap him in what he said. And they came and said to him, “Teacher, we know that you are sincere, and show deference to no one; for you do not regard people with partiality, but teach the way of God in accordance with truth. Is it lawful to pay taxes to the emperor, or not? Should we pay them, or should we not?” But knowing their hypocrisy, Jesus said to them, “Why are you putting me to the test? Bring me a denarius and let me see it.” And they brought one. Then he said to them, “Whose head is this, and whose title?” They answered, “The emperor’s.”
Jesus said to them, “Give to the emperor the things that are the emperor’s, and to God the things that are God’s.” And they were utterly amazed at him.
Posted by St. Martin of Tours

MEMORIAL - MARY, MOTHER OF THE CHURCH

A reading from the Acts of the Apostles 1:12-14
After Jesus had been taken up to heaven,  the Apostles returned to Jerusalem  from the mount called Olivet, which is near Jerusalem,  a sabbath day’s journey away.
When they entered the city  they went to the upper room where they were staying,  Peter and John and James and Andrew,  Philip and Thomas, Bartholomew and Matthew,  James son of Alphaeus, Simon the Zealot,  and Judas son of James. All these devoted themselves with one accord to prayer,  together with some women,  and Mary the mother of Jesus, and his brothers.
The word of the Lord.

R./:You are the great pride of our nation

You who dwell in the shelter of the Most High,
who abide in the shadow of the Almighty,
Say to the Lord, My refuge and my fortress,
my God, in whom I trust. (R./)

Because he clings to me, I will deliver him;
I will set him on high because he acknowledges my name.
He shall call upon me, and I will answer him;
I will be with him in distress. (R./)

I will deliver him and glorify him;
with length of days I will gratify him
and will show him my salvation. (R./)

Blessed are you, holy Virgin Mary, and worthy of all praise; for from you arose the sun of justice, Christ our God. Alleluia.

The Gospel of the Lord.
Praise to you Lord Jesus Christ.
Posted by St. Martin of Tours 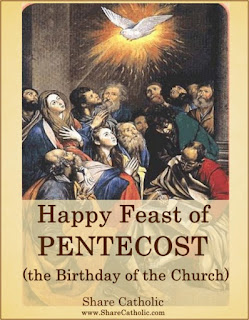 PENTECOST is a very important feast in the Catholic Church. This is because it marks the descent of the Holy Spirit, the third person of the Blessed Trinity, on the Apostles and Mary, the Mother of our Lord Jesus Christ. This happened fifty days after Easter. If you could recall, before the Ascension of Christ into heaven, He admonished His disciples to wait patiently for the Holy Spirit, who would come to energise and embolden them and also remind them of all the things He (Christ) had told them while on earth.

May God bless each one of you and your families and you are continually remembered in our prayers daily. Wishing you all a very Happy Feast of the Pentecost. 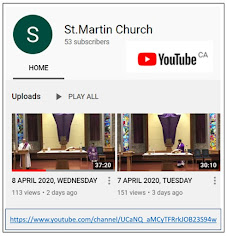